Since the Pokémon Go craze a few years back, Augmented Reality (AR) has been mentioned a lot. In my head, I imagine senior managers highlighting AR to their slightly confused colleagues: “We should have some of that AR stuff, I hear it’s really great” they say. “It’s probably exactly what we need.”

They aren’t wrong, AR is great. But AR is a tool to add to our digital toolbox rather than a silver bullet to fix all problems and make all projects more engaging. Like any tool, it’s not useful in every circumstance (except a hammer, but maybe that’s just my approach to DIY).

We’ve a lot of experience with designing AR apps; in fact, we were using AR long before its Pokémon catching abilities were revealed. So, I thought I’d share some insight into a use for AR that we’ve found to be particularly effective.

In the past year we’ve worked with clients to enhance their trade show events and engage their customers with augmented reality experiences. In the hustle and bustle of a busy trade show it’s hard to grab people’s attention, and it’s even harder to deliver an engaging narrative around what you have on display. AR allows us to create theatre for customers and draw them in.

We developed an AR application for AGCO (an American agricultural equipment manufacturer), around the engine components of their equipment. It allowed visitors to their stand at Agritechnica (the world’s No. 1 trade show for agricultural machinery) to take a look inside the tractor they had on display. This experience, combined with some excellent video content produced by Vermillion Films, helped to explain why genuine parts and AGCO’s servicing options offer the best value for maintaining your tractor in the long term. That’s not an easy narrative to explain at a noisy trade show, but by providing an interesting, tactile experience we gave visitors a different way to explore the services on offer. In this case, AR was a natural fit for the story we were telling; it was the best tool for allowing visitors to see inside the workings of the tractor.

In many ways, the narrative we needed to explain for SAS (the analytics software and solutions provider, not to be confused with the Special Air Service or Scandinavian Airlines!) was an even trickier one. SAS provide a range of software solutions that help to turn data into useful information. It became clear during our meetings with the SAS team that coming up with a way of showing this in action rather than trying to explain it would be much more compelling. Once again, AR was the tool for the job.

We used AR to show how a complex set of data could be given order and how tools could be used to identify a key piece of information. In this case, visitors used the AR tools to determine an identity thief from a large data set. They then used this information to enter a competition. The experience demonstrated what SAS do and why it’s valuable, and did it in a way that grabs attention and is fun and engaging.

So, if you find your boss saying that you should get some of that AR stuff, maybe you should, because if it’s the right tool it can be very effective. 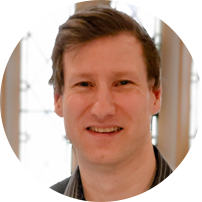 Blog Author:
Drew Wilkins
Drew is one of our Co-founders and Head of Educational Content at fish in a bottle. He has a wealth of experience in creating interactive content, games, websites and applications for web and mobile.
Share this article:

The Four Myths of Creativity